Congress Ready to Vote On 1,073 Page Stimulus Bill That Was Only Released at 11 PM Last Night

Republican Study Committee Chairman Tom Price discusses the big-government handout that Democrats are going to push through Congress. The final version of the bill even has hand written notes that allow for more irresponsible spending.
And, this historic spending bill that is the largest transfer of private wealth to public officials was only released to members of Congress at 11 PM last night.
Unbelievable.

Here is Rep. Price on this Democratic nightmare for America:

Democrats made the bill available at 11 p.m. on Thursday night.
At 9 a.m. Friday morning, the House begins debate on the bill.
If members of Congress actually took the time to read the bill, they would have to read through the night at a rate of 626 words per minute before heading to the House floor. What are the odds of that happening?

UPDATE: Sen. Frank Lautenberg (D-N.J.) predicted on Thursday that none of his Senate colleagues had a chance to read the bill, either.

UPDATE: Do you remember this promise? 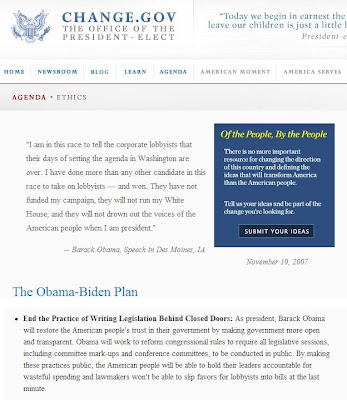 End the Practice of Writing Legislation Behind Closed Doors: As president, Barack Obama will restore the American people’s trust in their government by making government more open and transparent. Obama will work to reform congressional rules to require all legislative sessions, including committee mark-ups and conference committees, to be conducted in public. By making these practices public, the American people will be able to hold their leaders accountable for wasteful spending and lawmakers won’t be able to slip favors for lobbyists into bills at the last minute.

Instead we got a bill that the lobbyists got before the Congressmen, which will pass without being read.
Hope and change?
Via Instapundit