How anyone can vote for the Trillion-Dollar-We’re-All-Going-To-Die-Unless-The-Government-Pays-Off-Liberal-Interest-Groups Bill and still insist they are a Republican or conservative is beyond belief.
After all, there’s not too many socialists in the party. 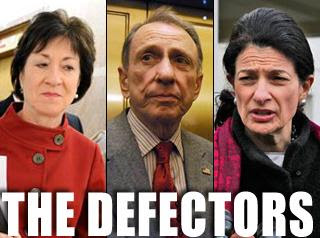 (FOX)
Dick Morris nailed it last night on The O’Reilly Factor.
He said if the three traitors would have voted “no” democrats would have been forced to come up with a better bill.
They didn’t.
Now we have this liberal pork-laden trillion dollar crap sandwich to chomp down.
Dick Morris wrote more about The Benedict Arnolds of the GOP today:

Because of the concentrated efforts of millions of Republicans all over America, Susan Collins (Maine) was reelected to the Senate, surviving a challenge once thought to be serious. She won, in large part, because she was able to drown her Democratic adversary in a sea of campaign spending made possible by donations from Republicans throughout the nation. As a result of their efforts, the GOP preserved its 40th vote in the Senate.

And when Saxby Chambliss was forced into a runoff in the Georgia Senate race, Republicans from all over the United States poured out their hearts and their funds to get him reelected, all to save the 41st vote and be able to filibuster Democrats’ big spending proposals.

Now the actions of three people who told their voters that they were Republicans have eliminated any hope that the GOP has for influence during the next two years. By making their own deals with the Obama administration and settling for cosmetic improvements in the so-called stimulus package, Sens. Collins, Olympia Snowe (R-Maine) and Arlen Specter (R-Pa.) have sold out their party, their state and their supporters.

Don’t buy their excuse that they shaved more than one hundred billion dollars in spending from the Senate version. By the time the Senate/House conference reconciles the differences between the versions of the legislation passed by the two houses, most of that spending will be back in the law anyway.

Collins, Snowe and Specter had a chance to send a message to Obama that he had to deal with the Republican Party to avert a filibuster. They could have made it clear that genuine bipartisan cooperation was necessary to pass legislation. These three senators, pledged to cut taxes and oppose massive growth in federal spending, could have demanded a 2-to-1 ratio for tax cuts over spending, rather than the reverse, as Obama is succeeding in getting.

Instead, the three wimped out and caved in for peanuts from Obama.

And, Dick’s not the only one…
David Karki at The North Star says it’s time to let them go:

For many years in Washington, the above has been the practical definition of those words and not what you’ll find in the dictionary. The idea that President Obama or anyone else among the Democratic leadership is the least bit interested in anything resembling Webster’s rendering of these terms is simply absurd.

But this bit of obvious fact apparently still escapes the deluded senators from Maine and Pennsylvania. Susan Collins, Olympia Snowe and Arlen Specter stabbed not only their party – of which they are clearly no longer any part in their hearts – but their country in the back when they agreed to vote with the Democrats and not filibuster the $820 billion “porkulus” bill.

This bill is purely Democratic pork to pay back their base and consolidate socialist power for years, if not decades, to come. They are scarcely attempting to conceal this fact and not even the most ignorant among us should be fooled in the slightest. But Senators Specter, Collins, and Snowe – a veritable Three Stooges of politics – appear to lack the wisdom and maturity of their classic movie comedy namesakes. And what they have foisted upon the public will not be a laughing matter. (Though I confess I wouldn’t mind seeing them get poked in the eyes or clonked in the cranium with a big wooden mallet.)

So the next question is simply this: What to do with them? Can these three be allowed to get away with such a betrayal? Moreover, if the Republican Party is so utterly spineless as to let this go without sanction, is there really any purpose to its continued existence? If these three can pull this garbage and suffer no consequence, the GOP will have advertised to the world that it truly stands for absolutely nothing. Their new motto can come from Kevin Bacon in Animal House: Thank you sir, may I have another? Thank you sir, may I have another?

The GOP was blocked out the stimulus conference negotiations today.