They love it!
New York libs are lining to see Will Ferrell mock George W. Bush on Broadway.
The show has it all… It even includes a projection of a large George Bush penis on the stage at one point. 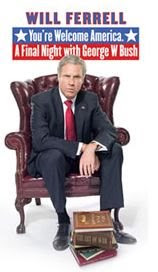 So far six audience members have stormed out midperformance of the Broadway show “You’re Welcome America. A Final Night with George W Bush,” the comedian Will Ferrell’s lampooning of the 43rd president, according to those keeping count at the Cort Theater. But they haven’t been leaving after a particular Ferrell quip.

They’ve been standing up, instead, after the projection of a supersize photo on the backdrop of the stage. A photo of a penis. Specifically, as Mr. Ferrell (who plays President Bush) leads the audience to believe, the president’s penis. Except that’s not quite right.

“It’s an anonymous but age-appropriate public domain Internet penis,” said Adam McKay, the play’s director. “We went on the Web and got a penis.”

“It’s not the president’s penis, as far as I know, and Will is 41, so we weren’t going to use his,” Mr. McKay added. “What I do know is that the photo gets one of the great shrieks of delight from the audience, and it’s also the one moment that is followed by people walking out.”

…No surprise, the play has been a major draw for New York liberals. The production, which largely features Mr. Ferrell doing the Bush character he made famous on “Saturday Night Live” on NBC, has been playing to near capacity at the Cort Theater, which has more than 1,000 seats, since it began previews on Inauguration Day. It is scheduled to run through March 15, and will be presented live on HBO next month.

Do you suppose these same loons be offended if it were Obumbler being roasted?