Hocus-Pocus Gingerocus
Witchcraft may be the fastest growing religion in America.
Maybe they can fix the economy?
They certainly couldn’t do any worse than the democrats in Washington today. 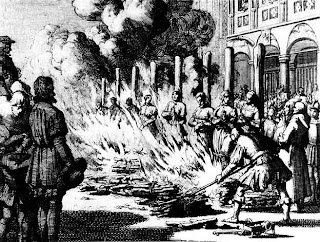 For many new members it’s all about “celebrating diversity.”
…They sound like another solid Democratic voting block.
Digital Journal reported:

While Jews, Muslims and Christians fight among themselves, one religion has darted in front of all the others to become the America’s fastest growing faith.

The religion of the witch trials becomes religion of the future with the membership exploding, according to experts. This is bringing consternation to believers in the Big Three of faith.

One expert claims that the number of Wiccan experts is doubling every 30 months. A recent book entitled “Generation Hex” by author Marla Alupoaicei declares that it will be the third largest religion of faith by the year 2012. This explosion of membership in Wicca has come about because of social estrangement, loneliness and the need to belong according to Dillon Burroughs co-author of the book. Although the West Coast and Salem, Massachussets is experiencing the most rapid growth, groups can be found all over the country, including the South and Mountain states.

Several years ago a news posting in Australia described the growth of Wicca in that country. One adherent, a nurse named Lilith said in an article about witchcraft in Australia that it is all about “celebrating diversity. Everything is beautiful in its own way. ” Not only is the religion growing it also has different divisions within it, just like the Big Three religions of Judaism, Christianity and Islam. There are those who are more or less orthodox in their beliefs as well.