American Susan Elbaneh was murdered in an Al-Qaeda attack in Yemen. 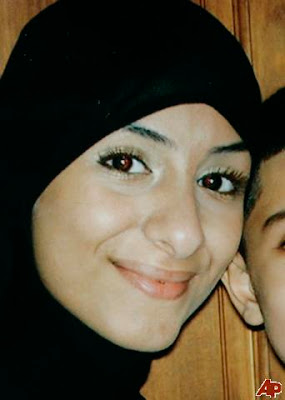 Susan Elbaneh in Lackawanna (Newshopper)
An American teenager was murdered by Al-Qaeda last month in Yemen.
The attack was led by former Gitmo detainee Abu Sufyan al-Azdi al-Shahri.
9-11 Families for a Safe and Strong America reported, via LGF:

Susan Elbaneh was murdered by al Qaeda and apparently most of the media does not want you to know. Last week, you saw her killers’ faces splashed across the headlines yet away from her hometown, the media was busy playing echo-chamber.

The proof of that assertion is: Robert F. Worth wrote of Susan Elbaneh’s fugitive cousin last March; he mentioned her death, name, and hometown last September while reporting on the bombing of our embassy in Yemen yet made no mention of Jaber Elbaneh; and their names and the latter’s connection to the Lackawanna Six were missing from his reports last week about two former Guantanamo detainees reuniting with al Qaeda in Yemen and their being suspected in that same attack upon our embassy.

Two Gitmo detainees rehabilitated in Saudi Arabia rejoined the jihad and recently made a movie.

Abu Sufyan al-Azdi al-Shahri (Shihri) is the Al-Qaeda chief in Yemen who organized the attack that killed Susan Elbaneh. Said Ali al-Shahri, is suspected of involvement in a deadly bombing of the United States Embassy in Yemen’s capital, Sana, in September.