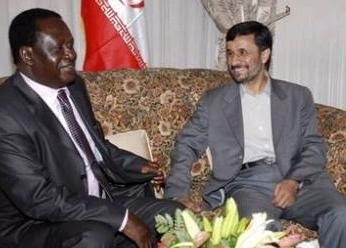 Ahmadinejad declared that relations between the regime in Iran and Kenya are improving after the meetings.

In 2006 Barack Obama took a trip to Kenya at US taxpayer’s expense.
While visiting Kenya as a guest of the government Obama campaigned with opposition leader socialist Raila Odinga, who also happens to be his cousin (says Odinga):

Odinga’s party lost the 2007 election in Kenya.
His party claimed the election was rigged in favour of President Mwai Kibaki. 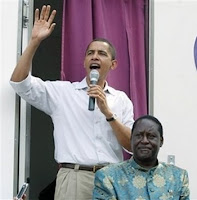 Odinga’s thugs then went on a rampage killing hundreds of Kenyans and burning churches. At least 600 people died in rioting after the election and 250,000 were displaced. Odinga was accused of ethnic cleansing during the clashes.