The massive turnout figure of 10 million people would make the Karbala pilgrimage five times bigger than the annual pilgrimage to Mecca.
In Saddam’s era marches to the city were banned. 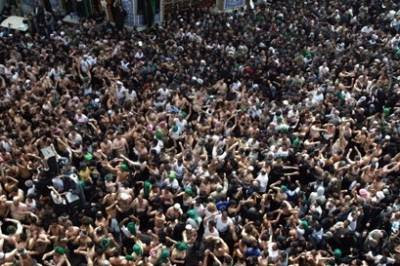 Shiite pilgrims beat their chests outside the Imam Abbas shrine in Karbala on February 16 2009. Hundreds of thousands of Shiite pilgrims mourned a revered imam under tight security in the Iraqi shrine city on Monday as eight people were killed in Baghdad bus bombings. (AFP/Mohammed Sawaf)

Over seven million visitors have converged on the holy Shiite city of Karbala throughout the past 10 days to commemorate al-Arbaeen pilgrimage, Karbala’s governor said, adding that an estimated 4 million pilgrims are expected to stay in the city on the pilgrimage day.

The Arbaeen pilgrimage, which falls on Monday (Feb. 16) is a religious occasion marking the 40 th day after the death of Imam al-Hussein, the Prophet Muhammad’s grandson and the third holiest figure for Shiite Muslims, in the battle of Taf in Karbala in the Hijri year 61 (680 in the Gregorian calendar).

Hundreds of thousands of pilgrims from inside and outside Iraq have started the long trek on foot for the Arbaeen pilgrimage. Tight security measures have been in force and a large number of security personnel have been deployed in Iraq’s holy sites in preparation for the occasion. Shiite pilgrims throng to pray at the Shrine of Imam Hussein in the central Iraqi city of Karbala on February 14, 2009. Snipers patrolled rooftops on Monday as hundreds of thousands of pilgrims, many beating their chests, mourned a revered imam under tight security after a spate of deadly attacks. (AFP/Mohammed Sawaf)