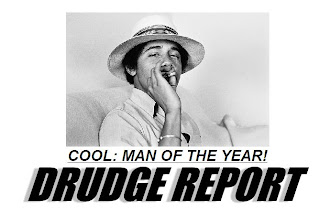 Spleef anyone?
From the Washington Post, via Michelle Malkin:

Sherry Jones was driving her 13-year-old son, Malcolm, to school the other morning when he mentioned something about some kid he didn’t like.

Something about the kid being a jerk.

Jones told him that wasn’t kind. When you speak of people, she said, always speak good of them.

“Look at Barack! . . . During the campaign, no matter what, Obama always took the high road,” she told him. “During the debates when John McCain would say a dig, Barack would never react. . . . He was always positive.”

Malcolm, who likes a good debate, was, for that moment, quiet.

In that silence, Jones realized that something about her spontaneous, trapped-in-the-car lecture was working. “If my son didn’t agree, he would let me know,” says Jones, an accountant who lives in Silver Spring. “He always has something else to say. . . . Usually, he will say, ‘Yeah, but . . . ‘ When I use Barack Obama as an example, I can see him. He’s quiet. He may sit up a little straighter.

The next time Malcolm is caught lying about his friends will he use the Barack excuse, too?
And, at night will Malcolm say his prayers like they do at Barack’s church?

Just wondering…
How will they fit the unrepentant domestic terrorist into this children’s lesson?