Maybe he’ll wipe himself off the map first. 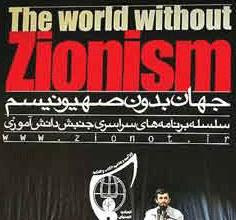 Mehdi Khazali, the son of the conservative Ayatollah Khazali, has written on his personal website that he recently learned that President Mahmud Ahmadinejad has Jewish roots.

Khazali notes that Ahmadinejad changed his family name from Saburjian, and says that the origins of the Saburjian family in the town of Aradan should be investigated.

Ahmadinejad’s relatives had told Britain’s “The Guardian” following his election that the family had changed its name for “a mixture of religious and economic reasons.”

“The name change provides an insight into the devoutly Islamic working-class roots of Mr. Ahmadinejad’s brand of populist politics,” journalist Robert Tait wrote in “The Guardian.” “The name Saborjhian derives from thread painter — sabor in Farsi — a once common and humble occupation in the carpet industry in Semnan Province, where Aradan is situated. Ahmad, by contrast, is a name also used for the Prophet Muhammad and means virtuous; nejad means race in Farsi, so Ahmadinejad can mean Muhammad’s race or virtuous race.”