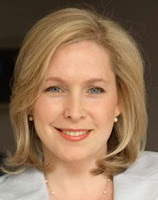 The surprising – and, for many Democrats shocking – decision to pick the conservative Gillibrand, 42, from Hudson in Columbia County, was disclosed by the governor in calls to party officials and some members of the state’s congressional delegation, many of whom said they were unhappy with the selection, sources said.

Caroline Kennedy dropped out of the race after it was reported she was having tax, nanny, and family issues.