“We ask you to help us work for that day when black will not be asked to give back, where brown can stick around, when yella’ will be mella’, when the red man can get ahead, man- and when white will embrace what is right. Let all of those who will do justice and love mercy say ‘Amen’. AMEN! Say AMEN. AMEN!…and Amen. AMEN!”

This is the same liberal hack who attacked President Bush at Coretta Scott King’s funeral while Bush was sitting on the stage: 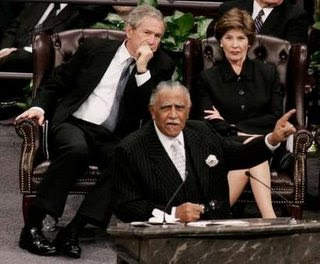 The mainstream media sullied the day too… Tom Brokaw led the way comparing the Bush Administration to a communist regime.

Obama reacted to Lowery’s benediction with a smile.