Bloody Protests in London…
Pro-Hamas supporters raised the Palestinian flag across from the Israeli Embassy in London:

Palestinian supporters rioted outside the Israeli Embassy in London after a massive protest in the streets of London today. 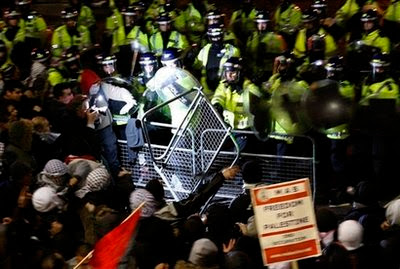 Protestors throw a barrier at police as they clash outside the Israeli embassy in London, Saturday, Jan. 3, 2009. Demonstrators hurled shoes at the tall iron gates outside the British prime minister’s residence in London on Saturday. (AP)

THERE were bloody clashes outside the Israeli embassy in London today as protesters threw fireworks, stones, shoes and glass bottles at riot police.

Around 200 police confronted protesters with batons, leaving several wounded, as masked men raced towards the gates of the Israeli embassy carrying Palestinian and Hezbollah flags.

The London rally was mirrored in towns and cities across the UK and locations around the world. They followed similar protests in parts of the Muslim world on Friday. 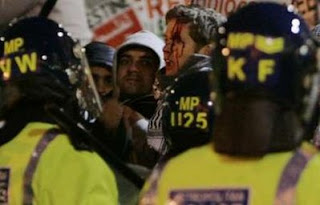 A pro-Palestinian demonstrator bleeds during a protest in response to the Israeli air strikes on Gaza near the Israeli Embassy in London January 3, 2009. (REUTERS/Luke MacGregor)

Power Line has more on the global Leftist, Marxist and Pro-Hamas protests against Israel.

Related… Pro-Hamas Protesters in Florida Tell Jews: “Go Back to the Ovens”

Doug Ross reports on several attacks and threats on Jewish institutions across the US.