In Indonesia alone, 19 million Muslims support violent jihad but Barack Obama believes the problem is only with a few rogue Al-Qaeda terrorists. 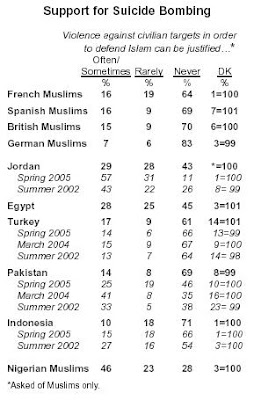 In a 2006 Pew international survey a majority of Muslims believed that Arabs are not behind the 9-11 and millions believed that violent attacks against civilians were acceptable.

** The transcript is Here.
The post-partisan president once again bashed President Bush:

The interview with the Dubai-based Al-Arabiya Network was a dramatic piece of public diplomacy aimed at capitalizing on the new American president’s international popularity, though it balanced America’s traditional commitment to Israel, whose security Obama called “paramount.’

“I have Muslim members of my family. I have lived in Muslim countries,” Obama said, according to a White House transcript. “My job to the Muslim world is to communicate that the Americans are not your enemy.”

…Obama also signaled a move away from President Bush’s confrontational, generalizing language. Melhem noted to Obama that “President Bush framed the war on terror conceptually in a way that was very broad, ‘war on terror,’ and used sometimes certain terminology that the many people — Islamic fascism. You’ve always framed it in a different way, specifically against one group called al Qaeda and their collaborators.”

“I think that you’re making a very important point. And that is that the language we use matters,” Obama replied. “[W]hat we need to understand is, is that there are extremist organizations — whether Muslim or any other faith in the past — that will use faith as a justification for violence. We cannot paint with a broad brush a faith as a consequence of the violence that is done in that faith’s name.

“And so you will I think see our administration be very clear in distinguishing between organizations like al Qaeda — that espouse violence, espouse terror and act on it — and people who may disagree with my administration and certain actions, or may have a particular viewpoint in terms of how their countries should develop,” he said. “We can have legitimate disagreements but still be respectful. I cannot respect terrorist organizations that would kill innocent civilians and we will hunt them down.”

OK– So Obama thinks that calling the enemy “Islamofascists” was a mistake and that “all religions” have their extremist organizations. He needs to check out this website that shows that Islamic radicals have carried out 12,650 deadly attacks since 9-11. The last time I checked, the Catholic nuns were not strapping on bombs under their habits.

He also incorrectly claimed that Bush generalized about Muslims when clearly Bush did no such thing. In fact, this may be lost on Obama but George W. Bush liberated 50,000,000 Muslims. This fact continues to go unnoticed by Obama and democrats.

And, of course, when Obama says the only problem we have are with terror organizations like Al-Qaeda it shows that he is absolutely oblivious to the nature of the enemy. What about the other 102,000 Muslims that approve of suicide bombings?

For being so “brilliant” Obama sure has a hard time making sense out of the obvious.
Dear Leader may get us all killed yet. But, then again, when you elect the most liberal senator president, this is what you get.

UPDATE: I’m afraid Mike191 speaks for many of us with his comment:

Week two of President Obama and I feel less secure than week one.
This is a ride into Dantes’ Levels of Hell.