“I have Muslim members of my family. I have lived in Muslim Countries.”

Countries? …I don’t recall our Pravda media disclosing that when Obama was running for office? That’s more information than we got in two years of campaigning.

Barack Obama finally talks about his Muslim family members to Al-Arabiya network yesterday in his first formal TV interview.
There was so much information in this interview that I’ve started a second post.
Here is the video via Copious Dissent:

Here is the transcript since the Obama Team does not post transcripts of interviews and press conferences.

Boy, it makes you wonder what will come out in his next Arab network interview?

Hillary Clinton was lambasted by Obama supporters and the Oba-media for bringing up Barack’s Muslim background during the primaries. 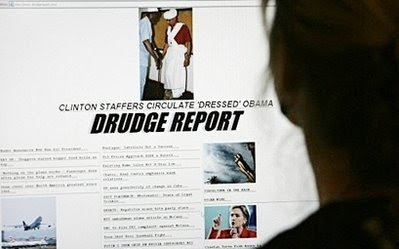 A woman looks at the Drudge Report website in Washington featuring a picture of US Democratic presidential hopeful Barack Obama (top R) dressed in traditional African dress during a 2006 visit to Wajir, Kenya. Hillary Clinton’s presidential campaign hit back furiously after standing accused of trying to smear Obama by circulating the photograph. (AFP/Nicholas Kamm)

Previously:
Obama Speaks to Al-Arabiya… Refuses to Link Islam to Terror–Says All Religions Have Extremists (Video)