For some reason I doubt this will get as much attention as the Foley scandal…
The first openly gay mayor from a major American city admitted this week that he had sexual relations with a teen. 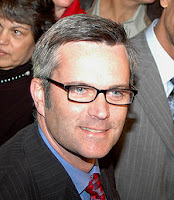 Democrat Sam Adams had been denying the rumors for over a year.
He took over as mayor on January 1, 2009.
The AP reported, via LGF Quick Links:

PORTLAND, Ore. – More than a year after denying it, the newly elected mayor of Portland has admitted having a sexual relationship with a male teenager in 2005.

Sam Adams, who is openly gay, acknowledged the relationship in a statement Monday, after the Willamette Week newspaper broke the story on its Web site.

In Washington, D.C., for the inauguration, Adams will cut his trip short to issue a public apology Tuesday afternoon in Portland, said Wade Nkrumah, his spokesman.

Adams, 45, said he and the teen were together in the summer of 2005, shortly after the teenager turned 18 in June, and when Adams was a city commissioner. The revelations come nearly a year and a half after Adams and the teen said rumors of a sexual relationship between them were false.

“I lied at the time because I was afraid that people would believe untrue rumors being circulated by an undeclared mayoral opponent that I had broken a law involving sexual relations with a minor. But this is not a good excuse,” Adams said in his statement.

Despite the rumors, Adams coasted to victory in his race, making Portland the largest U.S. city to ever elect an openly gay mayor. He was sworn in Jan. 1.

The AP failed to mention that Adams is a democrat.

This follows the news last week that the Racine, Wisconsin Mayor Gary Becker (Democrat) was arrested on charges of attempted second-degree sexual assault of a child, child enticement and possession of child pornography.

UPDATE: Sam Adams met the teen intern when he was 17.

The police union boss is calling for the mayor to resign.

Here is the statement by intern Beau Breedlove.