My friend Fern sent this from southern Israel where she is visiting:

I have just spent the last few days in southern Israel witnessing what Israelis are going through. One of the many poignant stories is that of “The Code Red Song”:

In the last 8 years, there have been 10,000 rockets fired from Gaza into southern Israel. A “Red Color” alarm warns the people of Sderot and the Gaza border region of incoming attacks. It gives them about 15 seconds to run to a bomb shelter. Residents of these towns have seen that their young children have become terrified of these “Red Color” alarms – so much so that many of them become paralyzed with fear. In order to overcome the fear of the alarm, ensure that the children respond to it swiftly, get them moving on automatic pilot, and empower them, psychologists have developed a “Red Color” song with corresponding movements that gets the children moving to safety in a light hearted and less frightening way:

Israel is dealing with thousands of children born in the last few years who only know of life with daily Red Color alarms. Having lived through just one this past Tuesday, I can attest to how terrifying a situation this is. Nobody should ever have to live under these conditions. If you want, feel free to put this on your website.
Warm regards,
Fern

Southern Israel has been under attack for the last 8 years. 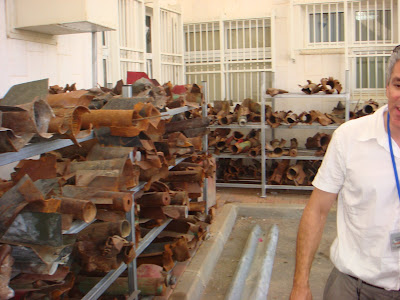 In the first six months of 2006 after Israel withdrew completely from Gaza, there were 500 Qassam rocket attacks on the city of Sderot, Israel. The city then started collecting the spent rockets and has them stashed out back of the Sderot police station.