Samarai Obama— It’s so life-like.
Now you can play Obama versus the White House Press Corps…
Watch Samurai Obama stare them down and slice them when they ask hard questions. 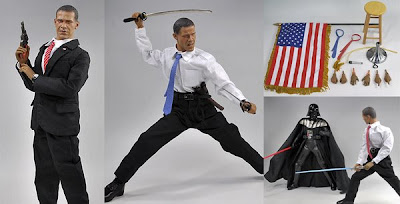 Or, pack a firearm and watch America’s top gun salesman protect himself from the mean conservative Rush Limbaugh.

There’s even a US flag so you can pretend you’re a Born Again American like the other libs.
More… Make It Happen sees a whole line of Obama dolls:

Does it come with the world’s smallest teleprompter?

This raises endless possibilities for an entire line of Barry & friends dolls. Imagine the Reverend Wright doll, you pull a string in his back and he spews racist hatred.

Don’t forget about the bus, so you can put supercharged Barry O in the drive seat and cruise around running former allies and associates over.

“Under the bus with you sucker.”