Israeli forces just moved into northern Gaza.
For the first time since the start of Operation Cast Lead, the IDF sent a large number of ground troops into the Gaza Strip on Saturday evening.
–The soldiers exchanged fire with the Hamas terrorists.

Hamas vowed on Saturday to turn the Gaza into a “cemetery” for the Israeli army but so far 20 terrorists have been killed inside the strip.

Israellycool is following the developments.

Haaretz is reporting on the ground offensive:

Defense officials said some 10,000 troops, including tank, artillery and special operations units, were massed on the Gaza border and prepared to invade. They said top commanders were split over whether to send in ground forces, in part because such an operation could lead to heavy casualties but also because they believe Hamas already has been dealt a heavy blow. 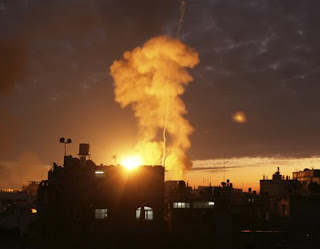 Jan. 3, 2009: Smoke rises following an Israeli airstrike on an area known to have smuggling tunnels in Rafah, in the southern Gaza Strip on the border with Egypt. (FOX News)

Meanwhile… 10,000 Israeli Leftists and Arabs protested against the Operation Cast Lead in the northern town of Sakhnin on Saturday.
Some of them were carrying Hamas flags.