Rayyan was not only the religious leader of Hamas’s military wing, Izzadin Kassam, but also one of their military commanders. 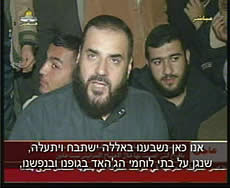 Hamas operative Nizar Rayan announces the organization’s intention to use “the bodies and souls” of [Palestinian] civilians to protect the houses of “jihad fighters” back in November 2006. (Terrorism Info)

Israel assassinated a Hamas strongman on Thursday in its first assault on the top leadership of the territory’s ruling group, escalating a crushing aerial offensive even as it declared itself ready to launch a ground invasion.

While turning up the heat on the battlefield, Israel appeared to be sounding out a possible diplomatic exit from its campaign, demanding international monitors as a key term of any future truce with Gaza militants. The operation is meant to crush Gaza militants who have been terrorizing southern Israel with increasingly menacing rocket fire.

In launching the campaign on Saturday, Israel made it clear that no one in Hamas was immune, and the air attack on the eight-story apartment building where Nizar Rayan lived sent that message home.

The airstrike blew a huge hole in the side of the building and sent a thick plume of smoke into the air. Nine other people, including two of Rayan’s four wives and four of his 12 children, also died, Palestinian health officials. The Muslim faith allows men to have up to four wives. 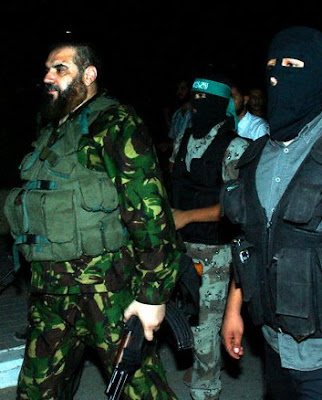 The Telegraph reported that all four of Nizar’s wives were killed in the attack.