It was a “Come to Obama” moment…
Thanks to Barack Obama secularist Democrats were singing Christian hymns on the metro. 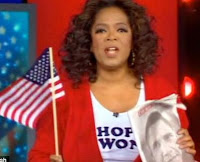 Oprah and her guests talked about the miracles of Dear Leader after his inauguration.
I Hate the Media reported, via Free Republic:

It’s the day after the election. Oprah Winfrey and her guests were quivering with O-gasmic delight.

Actor Forest Whitaker said, “The light of the New Age is here.”

Oprah gal pal Gayle King said, “Not only does he hear us. He feels us…he talks to my soul.”

Whitaker saw King’s goofy comment and raised her one by saying, “It’s okay to love” again thanks to the Obamas.

Nutcase historian Doris Kearns Goodwin piped in by saying it’s “extraordinary” to have a president care about history.

But the award for most o-gasmic comment of the day went to Ali Wentworth, wife of ABC’s George Stephanopoulos, who, with a straight face, claimed: “I took the Metro. And everyone was singing Amazing Grace.”

Unfortunately, these Tuesday Christians could not refrain from booing President Bush during the ceremony.