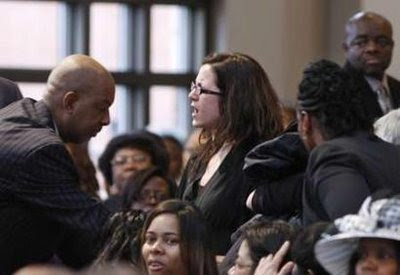 Conservative pastor Rick Warren spoke to a packed house for the annual King Day service at Ebenezer Baptist Church on Monday, as the upcoming inauguration of the nation’s first African-American president lent special significance to the event.

Warren, who will also speak at President-elect Barack Obama’s swearing-in on Tuesday, took the podium more than 2 1/2 hours into the service, saying, “This means more to me” than giving the inauguration prayer.

He praised Martin Luther King Jr. as both a model pastor and a heroic civil rights leader.

But Warren’s appearance also drew protesters who were angered that event planners invited an outspoken opponent of same-sex marriage.

Several dozen gay activists gathered outside Ebenezer before the service. Two protestors made their way inside and rose to shout at Warren when he began speaking; they were escorted out to applause from many in the crowd.

Earlier, the protesters outside hoisted signs declaring: “We still have a dream. Equality.” They chanted: “Gay, straight, black or white, we demand our civil rights.”

“Rick Warren is not a voice of unity or equality,” said Jeff Schade, director of GLBTATL, which stands for Gay, Lesbian, Bisexual, Transgender Atlanta.

Only 9% of Americans diapprove of Barack Obama inviting Pastor Rick Warren to give the Inaugural Prayer tomorrow. 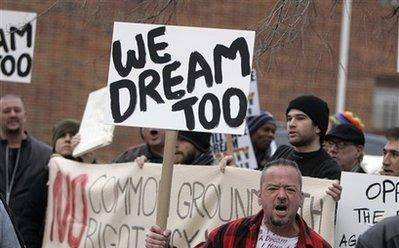 Jim Hoft
Jim Hoft is the founder and editor of The Gateway Pundit, one of the top conservative news outlets in America. Jim was awarded the Reed Irvine Accuracy in Media Award in 2013 and is the proud recipient of the Breitbart Award for Excellence in Online Journalism from the Americans for Prosperity Foundation in May 2016.
FBI Sends SWAT Team of 20 Agents to Home of Hollywood Actor Who Left Democrat Plantation and Entered US Capitol on Jan. 6
Senator Ron Johnson’s Staff is Looking thru 14,000 Hours of Jan 6th Video Footage - 38% of 800 Protesters Were Waved in West Terrace Door by Capitol Police (VIDEO)
Hee-Haw Jill Biden Forgets to Buckle Her Belt to Meet the Queen - Then Goes Bare-Legged in Second Visit with Her Majesty While Joe Wears Shades
Developing: Reporter Who Broke Clinton-Lynch Tarmac Story Found Dead - Moved His Family After Numerous Death Threats (VIDEO)
WOW! Boris Johnson Forced to Stop and Correct Joe Biden After He Already Introduced President of South Africa (VIDEO)
See more...