Change…
After the months of put downs, fabrications, waffling, misrepresentations of progress, attacks, etc…
The far left cut-&-runner has decided to stick with the Bush Iraq Plan after all.
It figures. 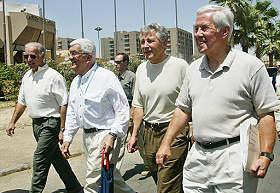 (AP)
Senators Richard Lugar, R-Ind, right, Chuck Hagel, R-Neb (2nd from right) and Joseph Biden, (left), D-Del, walk towards the Palestine Hotel in Baghdad, Iraq in June 2003. In December 2002 Biden said the US could be in Iraq for up to a decade. But then Biden voted to cut-&-run from Iraq along with Obama in April 2007.

At an appearance in Baghdad today, Biden said that “the new administration will stick to the timetable in the [U.S-Iraq Status of Forces] agreement.” As AP writer Robert Reid points out, “Obama pledged during his election campaign to withdraw all American combat troops from Iraq within 16 months of taking office” (naturally he misses the fact that Obama actually sponsored legislation that would have removed all troops from Iraq by March of last year). The SOFA, though, provides for combat troops to remain in Iraq until 2012, with the possibility of an even longer stay if the situation on the ground warrants it.

Biden said the incoming president, though still committed to withdrawal, now “wants the withdrawal to be a responsible one,” and that he “does not want to waste the security gains that have been achieved,” according to Iraqi spokesperson Ali al-Dabbagh.

This latest is, of course, a far cry from the Obama who opposed the ’surge’ in forces and General David Petraeus’s commitment to emphasize counterinsurgency in Iraq, as well as from the Obama who both refused to admit that the new strategy was succeeding and then, even after begrudgingly admitting that some gains had been made in that Arab state, made the head-scratching claim that he would still oppose the successful change in course if, knowing ahead of time how amazingly it would succeed, he were presented with the opportunity to do so again.