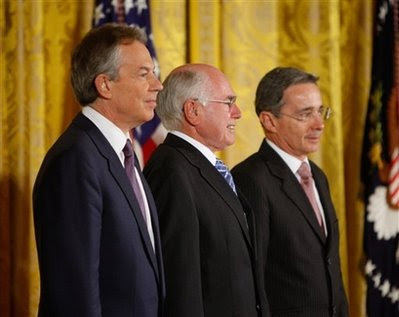 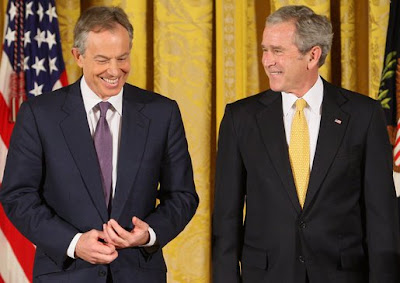 President George W. Bush stands with former Prime Minister Tony Blair of the United Kingdom as they listen to a citation honoring Mr. Blair as recipient of the 2009 Presidential Medal of Freedom. The presentation, held Tuesday, Jan. 13, 2009, in the East Room of the White House, will be the last such presentation by President Bush during his administration. (White House photo by Chris Greenberg)

It was a wonderful day at the White House as President Bush honored 3 friends and international leaders.
The very popular capitalist Alvaro Uribe was honored today:

This afternoon I’m pleased to award the Medal of Freedom to three extraordinary leaders. We honor a sitting President and two former Prime Ministers — each one of them a true friend of the United States who met historic challenges with great tenacity, and who provides a lasting example of statesmanship at home and abroad.

The first day I met Tony Blair, almost exactly eight years ago, he was in his second term as Prime Minister and I was just starting out. After our first meeting, a reporter asked if we’d found anything in common, and I jokingly replied that we both used Colgate toothpaste. (Laughter.)

The truth is I did feel a close connection to Tony Blair. As I said after the first meeting, I knew that “when either of us gets in a bind, there will be a friend on the other end of the phone.” My friend was there, indeed, after America was attacked on September the 11th, 2001. And it just wasn’t on the phone line. When I stood in the House Chamber to ask the civilized world to rally to freedom’s cause, there in the gallery was the staunch friend, Prime Minister Tony Blair.

He was there in a moment of trial to affirm the special relationship between the United States and the United Kingdom. And he was there to show America, and all nations, that he understood the stakes in the war on terror. As he said, “just as the terrorist seeks to divide humanity in hate, so we have to unify it around an idea. And that idea is liberty.” Under Tony Blair’s leadership, the might and the moral authority of Great Britain have been applied to the war on terror from the first day. Our nations have worked proudly together to destroy terrorist havens, liberate millions, and help rising democracies to serve the aspirations of their people.

Tony Blair’s entire career is defined by his devotion to democratic values and human dignity. At his very center, this man believes in freedom — freedom from oppression, freedom from hunger, freedom from disease, and freedom from fear and despair. In the House of Commons, as the longest-serving Labour Prime Minister in history, he fought to lift up his nation’s communities and better the lives of all its people. He helped turn generations of violence in Northern Ireland into years of peace. He drew the attention and conscience of the world to the suffering in Africa, and he continues to serve the cause of peace and democracy as the Quartet Envoy to the Middle East.

Out of office but still in public life, Tony Blair remains on the world stage as a man of high intelligence and insight — and above all, as a man of faith and idealism and integrity. The former Prime Minister of the United Kingdom will stand tall in history. And today the United States of America proudly honors its gallant friend, Tony Blair. (Applause.)

John Howard of Australia has spent a lot of years in politics. He’s won some, and he’s lost a few. There was even a time, two decades ago, when he thought his days of political leadership might be over. A comeback, he said, would be like “Lazarus with a triple bypass.” (Laughter.) The man has got an unusual way of speaking. (Laughter.)

With his plainspoken style and unpretentious manner, John Howard did make a comeback. He rose to his nation’s highest elected office, won four straight elections, and served longer than all other Australian prime ministers but one. And all the while, John Howard retained his close connection with the people of his country. His time in office was marked by great national confidence and prosperity and rising global influence. He won the respect of leaders around the world for his commitment to free markets, cooperation, and the peaceful resolution of differences. He was a faithful steward of Australia’s alliances, and a sturdy friend in a time of need.

At an event here in Washington, he reflected on the many tests that our two countries faced together in the 20th century. He spoke with feeling about our shared values — as well as our obligation to defend them, and “if necessary fight for them, and be ready to repel those who would seek to take [our] freedoms away.”

As it happens, John Howard spoke those words on Monday, September the 10th, 2001 — and in all that followed, he proved true to his convictions. He always has been brave in the defense of freedom. In these seven years, both our countries have lost innocent civilians and suffered casualties on the field of battle. But this man, who saw the burning Pentagon on September the 11th, and who confronted — comforted the survivors of Bali, never wavered in his commitment to overcoming this great danger to civilization. He never wavered in his support for liberty, and free institutions, and the rule of law as the true and hopeful alternatives to ideologies of violence and repression. He’s a man of honesty and moral clarity. He can make a decision, he can defend it, and he stands his ground. That’s why I called him a Man of Steel.

In the character of John Winston Howard we see that fine Australian spirit of “standing by your mates.” Our two countries, though half a world apart, have long enjoyed an easy and natural fellowship. And the 25th Prime Minister of the Commonwealth of Australia stands for all that Americans like and admire most about his wonderful country.

So, Mr. Prime Minister, our friend, welcome to the White House, and congratulations. (Applause.)

National leaders sometimes take office without fully knowing all the tests that await them. But when Alvaro Uribe became the President of Colombia, the challenges were in f

ull view. He knew exactly what he was getting into. 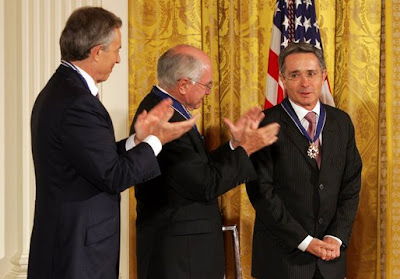 For more than a generation, good and decent people across that country had lived at the mercy of brutal drug cartels and illegal armed groups. A contagion of terrorist violence and killings and kidnappings had shaken the political system and caused many Colombians to despair for their nation’s future. Early in this decade, the Republic of Colombia was near the point of being, at best, a failed state — or, at worst, a narco-state. In those conditions, it took more than ambition and ideals to run for political office — it required immense personal courage and strength of character.

As a presidential candidate in 2002, Alvaro Uribe pledged to his people greater security, a healthier democracy, and a better chance for prosperous lives. He was elected on a theme that expressed perfectly what the Colombian people desired in a president: “Strong hand, and big heart.”

President Uribe’s leadership has been resolute and uncompromising. Today in Colombia, homicides are down 40 percent, kidnappings are down more than 80 percent, terror attacks are down by more than 75 percent. The forces of violence are on the defensive, and the people are reclaiming their country.

President Uribe’s fellow citizens know him as someone who speaks forthrightly and follows through on his commitments. With his lifelong interest in public policy, he has a phenomenal grasp of the details of governing. At the same time, he has formed a powerful bond with his people. They met their President in town halls across the country. They’ve seen him deliver results. They like him and they trust him — and they have made him the first Colombian leader in the modern era to win reelection.

Lately I’ve been asked to reflect on the most memorable events of my presidency. Among those is a phone call I received several months ago from President Uribe. He called to say that a group of hostages — including three Americans that had been held in captivity for five years — had been rescued, and were alive and safe and sound. It was a joyful moment, Mr. President. And it was a credit to your leadership.

For President Uribe, the great demands of office continue. Today the United States honors all Colombians by honoring the man they have chosen to lead them. By refusing to allow the land he loves to be destroyed by an enemy within, by proving that terror can be opposed and defeated, President Uribe has reawakened the hopes of his countrymen and shown a model of leadership to a watching world. Colombia remains a nation with challenges. But the future will always be bright in a country that produces such men as President Alvaro Uribe.

It is nice to see the popular Uribe get the respect he deserves after the way he has been treated by Pelosi and the Democrats.

BG added this in the comments on this historic occasion:

The world will regret the way they have
treated these three strong visionaries..
…Not to mention President Bush.