Yid With Lid reported on the latest tirade by White House Correspondent Helen Thomas on President Bush and Israel.
During her interview with the socialist website Democracy Now Thomas compared Israel to the Nazis. 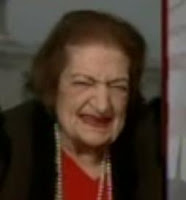 The video and transcript are posted at Democracy Now:

AMY GOODMAN: Helen Thomas, what would you have asked President Bush if you got a chance yesterday? Did you expect that he would call on you?

HELEN THOMAS: No, but I wish that he had, because I would have—I mean, I would have asked a news question. I would not have gone into the nostalgia, though I’m not criticizing it, because I do think the reporters had to wrap up to find out what he really thought about himself and his legacy. But I would have asked why—why do you continue to support the killing in Gaza? And that’s what we’re doing.

I mean, you can’t remain neutral. I remember the rabbi who spoke at the Martin Luther King march on Washington. Heschel had a cameo appearance, and he said, “The greatest sin of all in the Nazi era was silence.” When you remain silent to the suffering and the incredible aggression against a people, then you are culpable.

Nice… It sounds like Helen Thomas is not just a raging Bush-hater, she’s an anti-Semite.
Isn’t it past time for this toxic Leftist to retire?