Snow fell in the United Arab Emirates for only the second time in recorded history this week. 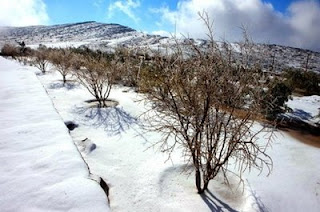 Snow is so rare in the region that one lifelong resident said the local dialect had no word for it.
Certainly, this can all be explained by global climate change due to man(?)

Now remember…
Arctic sea ice growth finished the year in 2008 at the same level as 1979.
The oceans have been cooling since 2003.
Sea ice is growing at the fastest pace on record.
A rare 50 year arctic blast is cooling the west coast.
Greenland’s glaciers are stabilizing.
There are growing fears of a coming freeze worse than the ice age.
Alaskan Sea Glaciers are advancing for the first time in 250 years.
And, for the second straight year the Earth is, in fact, cooling… not warming.

This US Climate Map October 2007-November 2008 showed that temperatures were well below normal throughout the US in 2008.

It looks like Al Gore was a bit off in his prediction that North Pole will be completely gone in 5 years.

But, don’t worry. It won’t stop the Democratic Congress and Obama Administration from blowing billions upon billions on bogus, expensive and inept green energy programs this year.