The vote was close today but it looks like the people of Bolivia approved the new constitution supported by their Marxist leader Evo Morales.
Morales is a favorite of the liberal Western media because he is the country’s first fully indigenous head of state. 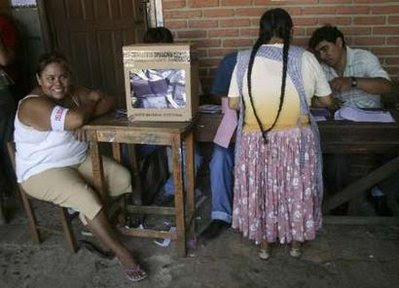 A woman casts her vote in a national referendum on the new constitution in Santa Cruz January 25, 2009. Bolivians voted on a new constitution on Sunday that would give the indigenous majority more political leverage and allow socialist President Evo Morales to run for re-election. (REUTERS/Victor Rojas)

Exit polls suggest Bolivia has approved a new constitution backed by President Evo Morales that he says will empower the country’s indigenous majority.

Polls for some TV stations put the yes vote in the referendum at about 60%.

Planned reforms including greater state control of natural resources, reductions in future land holdings and the creation of state assemblies.

Mr Morales, an Aymara Indian, has pursued political reform but has met fierce resistance from some sectors.

Opponents concentrated in Bolivia’s eastern provinces, which hold rich gas deposits, argue that the new constitution would create two classes of citizenship – putting indigenous people ahead of others.

The wrangling has spilled over into, at times, deadly violence.

UPDATE: Fausta has more on the Bolivian referendum.