UPDATE: Here is the amazing video of the strikes today on the Hamas strongholds in urban Gaza areas, via the IDF YouTube Channel.
It is unclear if these strikes were at the UN School:

And, here is the IDF spokeman describing the airstrike at the UN School today:

Obviously, that is a much different story than the Hamas propaganda published at The Independent.

Weapons and the bodies of two Hamas members were found at the UN School in Gaza after the airstrike today. 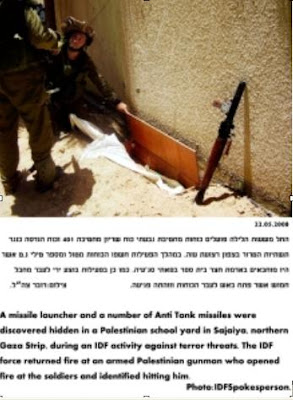 IDF Spokesperson reported– A missile launcher and a number of anti tank missiles were discovered hidden in a Palestinian school yard in Sajalya, northern Gaza Strip, during an IDF operation against terror threats. The IDF force returned fire at an armed Palestinian gunman who opened fire at the soldiers and identified hitting him.

The IDF also identified two Hamas members who were killed in the strike earlier today:

After an investigation that took place over the past hour it has been found that amongst the dead at the Jabalya school were Hamas terror operatives and a mortar battery cell who were firing on IDF forces in the area. Hamas operatives Imad Abu Askhar and Hassan Abu Askhar were amongst terrorists that were identified to be killed.

“We face a very delicate situation where the Hamas is using the citizens of Gaza as a protective vest,” IDF Spokesperson Brig. General Avi Benayahu said following the incident.

YNET News has more on the attack at the UN School this morning:

The Israeli army, however, claimed that terrorists were firing mortar shells from the school just moments before the strike. The IDF stated that a number of Hamas gunmen were inside the school, among them Imad and Hassan Abu-Askar, who are known to the IDF as Hamas operatives.

Palestinian sources reported that at least 40 civilians were killed in the strike on the school, which belongs to the United Nations Relief and Works Agency for Palestine Refugees (UNRWA). A UN spokesman claimed 30 Palestinians were killed.

According to the Palestinian reports, a number of tank shells landed around the school, in which refugees who had fled their nearby homes were taking shelter.

More… The Israelis overwhelmingly support the war against Hamas.

The New York Times has testimony from a witness who said the terrorists were at the location before the bombing:

A young witness from Jabaliya, Ibrahim Amen, 16, said that he had seen one of the militants, whom he identified as Abu Khaled Abu Asker, in the area of the school right before the attack.

Ibrahim said he saw the militant after he answered calls for volunteers to pile sand around the camp “to help protect the resistance fighters.” Ibrahim went to pile sand near the school with his brother, Iyad, 20, who was then injured by the Israeli mortar fire.