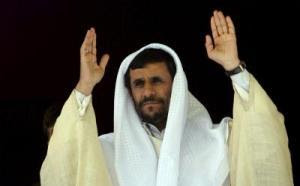 Iranian President Mahmoud Ahmadinejad said if Moses were alive today he would punish the Zionists who are worse than the pharaoh.
Iranian Fars News reported:

Iranian President Mahmoud Ahmadinejad said the Israeli attacks on the Gaza Strip are proof that Zionists are not true followers of Moses.

In a Thursday interview in the southeastern Iranian province of Sistan-Baluchistan, President Ahmadinejad said Israeli echelons pretend to be the followers of Prophet Moses but have proved with their violent attacks on Gaza that they have no moral values.

“These minority of criminals and thieves are liars because they represent themselves as followers of the prophet. If Moses had been present today, he would first punish the Zionists for their conduct which is even worse than that of the Pharaoh,” he said according to press tv.

Israeli began air operations against the Gaza Strip – home to 1.5 million Palestinians – on Saturday. The Israeli attacks have so far lead to the death of some 417 Palestinians and the injury of over 2000.