Let’s see. It took Obama about a week to surrender to Russia.
So, let’s play it safe and give him a couple of days before he apologizes to the Iranian regime. 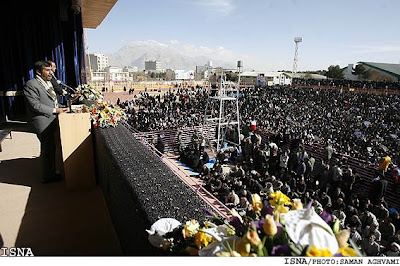 Mahmoud warned Obama during his talk in the western city of Kermanshah. (ISNA)

A day after President Obama struck a conciliatory tone toward Iran, President Mahmoud Ahmadinejad urged Washington on Wednesday to apologize for its actions toward his country over the past 60 years and said it was unclear whether the new American administration was merely shifting tactics or wanted real change.

But, in a speech in the western city of Kermanshah, he did not explicitly rebuff the American president’s gesture. “We are waiting patiently,” he said, referring to the policies of the new administration in Washington. “We will listen to the statements closely, we will carefully study their actions and if there are real changes, we will welcome it.”

Mr. Obama, in his first television interview at the White House since taking office, said that it was important to be willing to talk to the Iranians, both to express differences and to explore “where there are potential avenues for progress.”

“And as I said during my inauguration speech, if countries like Iran are willing to unclench their fist, they will find an extended hand from us,” Mr. Obama said in the interview with Al Arabiya television that was broadcast on Tuesday.

Secretary of State Hillary Rodham Clinton also said Tuesday that Iran had a “clear opportunity” to engage with the international community.