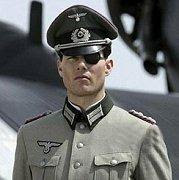 Tom Cruise called for the US Government to hold a census count on homosexuals.
Huliq News and Free Republic reported:

Responding to news that Britain is counting the number of homosexual citizens it has in a new survey beginning in January, everyone’s favorite troublemaker, actor Tom Cruise, has called on the U.S. government to do the same.

As Cruise told talk show host Jimmy Kimmel last night: “I am tired of not knowing. I am tired of hearing numbers quoted all over the map from practically zero to only a few million, all of them certainly far less than I believe there are. I think it is, psychologically, now the time to try and do something about this.”

Kimmel had raised the subject in his opening monologue that evening but appeared dismissive of Cruise’s support for the idea, saying: “I think such a census would prove to be a nightmare for any statistician.”

Cruise was on Kimmel’s show to publicize his newest film, “Valkyrie,” which opens Christmas Day. “Valkyrie” is the true story of a plot to kill Adolph Hitler.