The US Department of Defense reported a suicide bomber detonated himself in Khowst province eastern Afghanistan today. He killed 16, including 14 young children on their way to school, and wounded 58 others in the blast.
Here’s the DOD video of the bombing, via the AP:

The Afghan children were 8 to 10 years of age. 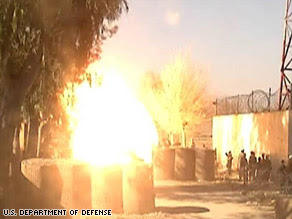 The U.S. military released this photo of the blast near a voter registration site. (CNN)

A Taliban suicide bomber killed 14 primary school children walking to school on their last day of classes.
The AP reported:

A single-file line of school children walked past a military checkpoint Sunday as a bomb-loaded truck veered toward them and exploded, ending the lives of 14 young Afghans in a heartbreaking flash captured by a U.S. military security camera.

The video shows an SUV slowly weaving through sand bag barriers at a military checkpoint just as a line of school children, most wearing white caps, comes into view. They walk along a pathway between the street and a wall, several of them pausing for a few seconds in a group before moving forward again. The vehicle moves toward the security camera while the children walk in the opposite direction, nearly passing the SUV when the footage ends in a fiery blast.

Photos of the bombing’s aftermath showed bloodied text books lying on the ground beside small pairs of shoes. Afghan officials said the kids were attending a final day of class for the year to find out whether they would move up to the next grade.

Dr. Abdul Rahman, a doctor at a hospital near the blast, said the children were aged 8 to 10.

The U.S. military said the attack in the eastern province of Khost killed 16 people, including 14 children, an Afghan soldier and another person — likely a private security guard that Afghan officials reported killed. The U.S. said 58 people were wounded.

The godless Taliban took responsibility, via CNN: “Zabiullah Mujahid, a Taliban spokesman speaking by phone from an undisclosed location, said the suicide bombing was carried out by Qari Hameedullah, a Taliban fighter.”