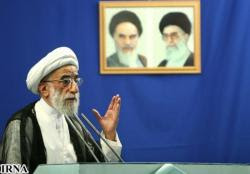 “The shoe Intifadha in Iraq should not be overlooked easily. Well done to Iraqi journalist for throwing the shoes at the US President.

His shoes should be kept in Iraq’s political museum. The pair of shoes are more valuable than crowns, medals and signs,” Ayatollah Jannati told large groups of Tehrani Friday prayers worshipers at Tehran University campus.

He suggested carrying shoes in all the anti-US demonstrations held in Iran and Iraq.

“The shoe hurling by Iraqi journalist had many messages which the world received them and Iraqi people too held demonstrations afterwards. People should support the Iraqi journalist,” he added.

The shoe-chucker and Far Left hero Muntadar al-Zeidi is a supporter of Muqtada al-Sadr who is aligned with the Iranian regime.