Ann Coulter just warned about this happening this morning. 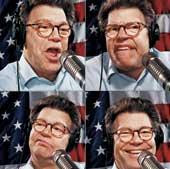 Air America host Al Franken is poised to steal the lead from Norm Coleman any minute now in the Minnesota senate election.

The Star-Tribune has live video here.

The lizard people vote was tossed.

You knew on election night when Coleman only had a 750 vote lead that this seat was lost.

UPDATE: Coleman’s lead is down to 2 votes.
Coleman had entered Thursday’s session leading Franken by 360 votes.
Counting will resume on Friday.

UPDATE 2: Ed Morrissey writes and explains that it’s because these are ballots that were Franken votes that Coleman challenged. The progression would be for Coleman’s vote lead to decline.
It did.

It looks like Minnesota will have itself a new senator!

UPDATE 3: The Weekly Standard Blog says Coleman may still have a chance.