A suicide bomber on a bike hit a pro-Palestinian rally in Mosul on Sunday. 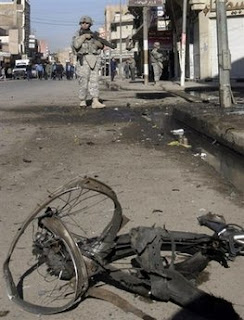 US soldiers stand guard at the site of a suicide bomb attack in the northern Iraqi city of Mosul. A suicide bomber on a bicycle targeted a protest condemning Israeli air raids on the Gaza Strip, killing one civilian and wounding 16 on Sunday, police said. (AFP/Mujahed Mohammed)

A bike bomber exploded at a pro-Palestinian rally in Mosul on Sunday.
Israel was blamed for the attack.
The AP reported:

A suicide bomber on a bicycle blew himself up Sunday amid a crowd of demonstrators in northern Iraq who were protesting Israel’s airstrikes on Gaza, killing one demonstrator and wounding 16 others, Iraqi police said.

The bomber rode his bicycle into the demonstration of about 1,300 people in the center of the northern city of Mosul, said a police officer who spoke on condition of anonymity because he was not authorized to speak with news media.

The demonstration was organized by the Sunni Iraqi Islamic Party. The party’s Mosul spokesman, Yahiya Abid Mahjoub, complained that police and the Iraqi army had not taken security precautions for the demonstration.

There has been no claim of responsibility for the attack, the officer said.

“The ones who targeted our brothers in Gaza are the same who targeted us in Mosul today. They are agents of Israel,” Mahjoub said.