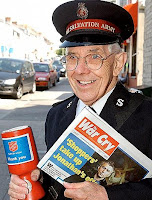 After 130 years of raising money at Christmas time, the Salvation Army is now telling members to quit rattling their collection tins.
It may offend other religions.
The Daily Mail reported:

For 130 years they have been part of Christmas, filling the air in towns across the land with music and carols.

But one thing is missing from the repertoire of Salvation Army bands this year – the percussion of rattling tins.

Members have been forbidden to shake their charity tins – even if it’s done in time to the music – in case it harasses or intimidates people. One said she had been told it might also offend other religions.