Ruh-Roh… It was already reported that Rahm Emanuel was keeping quiet since the Blagojevich Scandal broke. 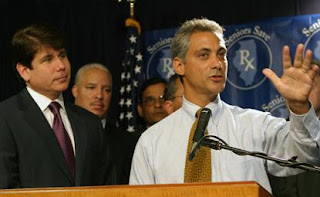 But, this morning and later this afternoon Rahm Emanuel continued to duck questions about the scandal.
The Chicago Sun-Times reported:

President-elect Barack Obama’s chief of staff, Rahm Emanuel, refused to take questions from reporters this morning about whether he was the Obama “advisor” named in the criminal complaint against Gov. Rod Blagojevich.

The complaint states Blagojevich wanted a promise of a high-level appointment or some other reward for Blagojevich in exchange for Blagojevich naming Obama’s friend Valerie Jarrett to replace him in the U.S. Senate.

Emanuel was uncharacteristically absent from Obama’s news conference this morning. He was spotted two hours later in the lobby of Chicago’s City Hall. He was there to listen to his two children performing in a concert with their school, Anshe Emet.

A Sun-Times reporter pressed him to comment about whether he was the emissary named in the criminal complaint.

Asked, “Can’t you do both?” Emanuel replied, “I’m not as capable as you. I’m going to be a father. I’m allowed to be a father,” and he pushed the reporter’s digital recorder away.

Blagojevch was caught on tape saying that he wanted the Obama advisor in question to know what Blagojevich wanted in exchange for the Jarrett appointment.

** The Smoking Gun, that bastion of conservative thought, already reported that Emanuel was linked to the case:

“Rahm Emanuel, the incoming White House chief of staff, is referred to in the affidavit as “President-elect Advisor.”

Those reporters better watch it…
Or, they may see a dead fish come in the mail.

More… Mr. Obama did not rule out that officials on his Transition Team had held discussions with the governor’s office about the matter, nor did he deny that any of them knew about the governor’s attempted deal-making –Jake Tapper.