More Bad News For the Hope and Changers–
Barack Obama and his team issued categorical denials that Obama and/or his staff had contacted Blagojevich or his staff about the succession.
Of course, it is apparent now that this was a lie.

And, despite the denials from the media, it is now obvious that the likelihood that Barack Obama and Chicago’s political culture have little to do with each other is less statistically probable than being struck by lightning.

In fact there was a report on this…
The People’s Cube posted some surprising facts that most Americans are not aware of: 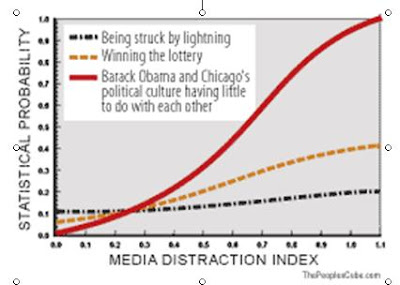 ** That if Pres. George W. Bush really WERE Hitler, most of his political opponents would be dead by now?

** That if politicians could run things like the auto industry successfully, the Soviet Union WOULDN’T have collapsed?

** That the national media’s fantasy that Barack Obama and Chicago’s political culture have little to do with each other is less statistically probable than being struck by lightning or winning the lottery?

The Swamp today reported on the talks held between Rahm Emanuel and the governor’s office over Obama’s open senate seat:

Rahm Emanuel, President-elect Barack Obama’s pick to be White House chief of staff, had conversations with Gov. Rod Blagojevich’s administration about who would replace Obama in the U.S. Senate, the Chicago Tribune has learned.

Emanuel, who has long been close to both Blagojevich and Obama, has refused to respond to questions about any involvement he may have had with the Blagojevich camp over the Senate pick. A spokeswoman for Emanuel also declined to comment Friday.

One source confirmed that communications between Emanuel and the Blagojevich administration were captured on court-approved wiretaps.

So much for Hope and Change.

What’s more, Blagojevich could only work from an approved list from Obama, according to one of the candidates. Obviously, Obama had a hand in this process from the start.

Pat Dollard reports that the scandal will likly ruin the inauguration, via LGF.