For nearly four decades, Governor Bill Richardson claimed that he had been drafted by the Kansas City Athletics baseball team… He wasn’t. 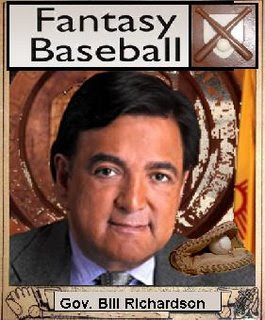 A federal grand jury is investigating how a company that advised Jefferson County, Alabama, on bond deals that threaten to cause the biggest municipal bankruptcy in U.S. history, did similar work in New Mexico after making contributions to Governor Bill Richardson’s political action committees.

The grand jury in Albuquerque is looking into Beverly Hills, California-based CDR Financial Products Inc., which received almost $1.5 million in fees from the New Mexico Finance Authority in 2004 after donating $100,000 to Richardson’s efforts to register Hispanic and American Indian voters and pay for expenses at the Democratic National Convention in 2004, people familiar with the matter said.

The Federal Bureau of Investigation asked current and former officials from the state agency if any staff members in the governor’s office influenced CDR’s hiring, said the people, who declined to be identified because the proceedings are secret. Richardson, who is President-elect Barack Obama’s designate for Commerce Secretary, has a staff of at least 30 people.

Remember- This is the change you’ve been looking for.