Another day, another close Obama associate engulfed in scandal…
For nearly four decades, Governor Bill Richardson claimed that he had been drafted by the Kansas City Athletics baseball team… He wasn’t. 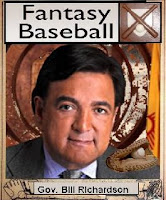 Now… New Mexico Governor and Obama Commerce Secretary Bill Richardson is being investigated on corruption charges.
The LA Times has the latest:

It seems that Illinois’ legally challenged Gov. Rod Blagojevich is not the only close Barack Obama associate and Democratic governor being investigated by the feds for possibly selling government business in return for campaign contributions.

New Mexico’s Gov. Bill Richardson, who is the newly named Secretary of Commerce in Obama’s about-to-be Cabinet, is also being investigated by a federal grand jury in his home state for possibly steering state bond business from the New Mexico Financial Authority toward David Rubin, a significant campaign contributor, according to an NBC News report, among others.

NBC’s Lisa Myers reports that two former state officials say they’ve recently been questioned by a federal grand jury specifically about allegations that Richardson or aides pushed state business worth nearly $1.5 million in fees toward CDR Financial Products in 2004. The company is headquartered in Beverly Hills.

This was about the same time as CDR’s founder, Rubin, donated $100,000 to two of Richardson’s political action committees; mainly it appears to cover expenses of the governor and his staff at the Democratic Party’s National Convention in Boston that summer.

Rubin also donated another $29,000 to Richardson’s unsuccessful presidential campaign this year and last.

Related… Another Illinois politician, Rep. Jan Schakowsky, is the latest democrat to be linked to a scandalous operation.
Hat Tip Larwyn