Barack Obama said goodbye to his white grandmother who raised him on Tuesday. 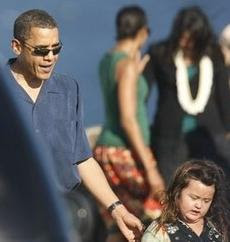 President-elect Barack Obama paid his last respects on Tuesday to the woman he called the rock of his family, the grandmother who helped to raise him, before scattering her ashes from a Hawaiian shoreline.

Obama skipped the memorial in November.

Barack Obama compared his white grandmother to his racist anti-American mentor Jeremiah Wright during his campaign for president.
He said she was the “typical white person.”