Because every shopper needs a quiet space to pray for that next big sale. 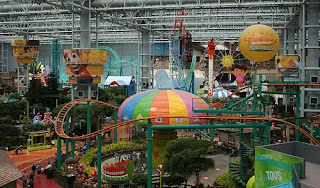 The Mall of America recently announced that it will set up prayer rooms to accomodate Muslim shoppers.
Mshale reported, via ROP:

BLOOMINGTON, Minn. – On the day Muslims around the world began to celebrate Eid al-Adha, Fatuma Mohamed was at the Mall of America (MOA), far away from where she would normally say her prayers.

But she and other Muslims needed to take time from the activities of the mall and find a quiet area to pray as Muslims do during the festival that commemorates Ibrahim’s willingness to sacrifice his only son for God.

“I said my prayer right at that corner,” Mohamed said, pointing to the spot.

Another Muslim, Amran Ali, did the same.

“I had to say my prayer at a corner,” Ali said. “I was stared at, but no one bothered me.”

Every year, as Muslims in America are compelled to engage in business, work and shopping during the holidays, many find themselves away from mosques and other places where they can hold prayers without interruption. They are forced to seek privacy in corners and alleyways, places that often subject them to unwanted attention. Some Muslims also worry that their repetitive calls of “Allah akbar!” (God is great!) during prayers could be misconstrued as calls for Jihad.

“Of course, out of curiosity people will stare at you but don’t say anything,” said Shuuriye Ali. “I wish they would ask. I would love to educate them about my peaceful religion.”

This year Muslim leaders from the Twin Cities area were able to persuade MOA, the largest enclosed mall in the United States, to set aside a room for prayers.