Terrorist killer cries for Mommy.
…So does Moshe Holtzberg. 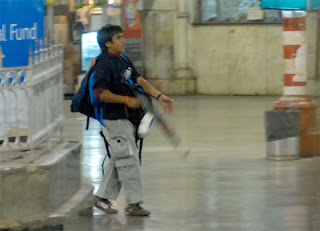 Ajmal Amir Kasab, says he is 21 years old, speaks fluent English, hails from tehsil Gipalpura in Faridkot (or so he says) in Pakistan, and is the only terrorist from the horrific attacks who was captured alive. (India Times)

Ajmal Amir Kasab broke down and cried out for his mother during his interrogation in India. The baby-faced mass murderer says he wants to live.
The Times of India reported, via Free Republic:

Mohammed Ajmal Amir Kasab, the lone terrorist in police custody, repents his act and wants to return to Pakistan. On Saturday night, he broke down in custody, police sources said.

“Mujhe maaf kar do, mujhe apne desh Pakistan jana hai, meri emmi ke paas” (Please forgive me, I want to see my mother, I want to go back to my country Pakistan)” Kasab is said to have told policemen interrogating him. “I want to live,” he further said.

On Friday, Kasab also expressed his desire to write to his parents in Pakistan. Joint commissioner of police (crime) Rakesh Maria said, “We are legally examining whether he should be granted permission. He told us that he wanted to convince his old parents about how he was misled by the LeT.”