Thanks to President George W. Bush, his Republican support in Congress and the American military, these Iraqi children have the chance to live in a free and democratic Iraq. 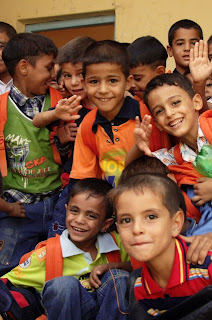 The new U.S.-Iraq security pact that was approved by Iraqi lawmakers in November was ratified by Iraq’s Presidency Council yesterday, senior U.S. officials said. The agreement establishes the foundation of a long-term bilateral relationship between the United States and Iraq.
Charles Krauthammer celebrated this historical pact today at the Washington Post:

The barbarism in Mumbai and the economic crisis at home have largely overshadowed an otherwise singular event: the ratification of military and strategic cooperation agreements between Iraq and the United States.

They must not pass unnoted. They were certainly noted by Iran, which fought fiercely to undermine the agreements. Tehran understood how a formal U.S.-Iraqi alliance endorsed by a broad Iraqi consensus expressed in a freely elected parliament changes the strategic balance in the region.

For the United States, this represents the single most important geopolitical advance in the region since Henry Kissinger turned Egypt from a Soviet client into an American ally. If we don’t blow it with too hasty a withdrawal from Iraq, we will have turned a chronically destabilizing enemy state at the epicenter of the Arab Middle East into an ally.

Also largely overlooked at home was the sheer wonder of the procedure that produced Iraq’s consent: classic legislative maneuvering with no more than a tussle or two — tame by international standards over the most fundamental issues of national identity and direction.

The only significant opposition bloc was the Sadrists, a mere 30 seats out of 275. The ostensibly pro-Iranian religious Shiite parties resisted Tehran’s pressure and championed the agreement. As did the Kurds. The Sunnis put up the greatest fight. But their concern was that America would be withdrawing too soon, leaving them subject to overbearing and perhaps even vengeful Shiite dominance.

More here.
Congratulations to President Bush, our outstanding military and to all who contributed to make this a reality!