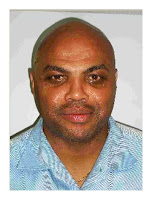 Lt. Eric Shuhandler of the Gilbert Police Department said an officer pulled Barkley over after he ran a stop sign in Scottsdale’s Old Town area, a trendy spot known for its nightclubs and bars. Gilbert and Scottsdale are in the Phoenix metro area.

The officer conducted field tests, Shuhandler said, but Barkley declined to take a breath test to measure his blood-alcohol level.

“When he arrived at the station, police administered a blood test, which is customary of our police department to do,” Shuhandler said, adding that Barkley consented to the blood test.

The former NBA power forward was cited for driving while impaired and released.

Barkley is talking about running for governor of Alabama, as a democrat, possibly in 2010.

UPDATE: Now we know why Sir Charles was in such a hurry…
Barkley admitted to the cops who pulled him over that he was “racing to get a blow j*b.”