Iraqi Prime Minister Nouri al-Maliki announced that investigators discovered a “killer of Iraqis” was behind the shoe-throwing incident. 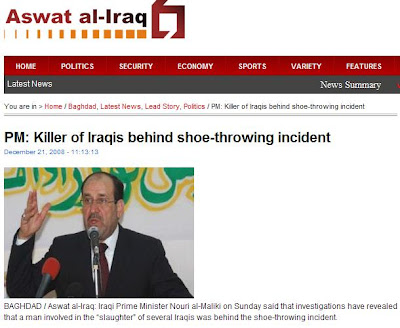 BAGHDAD / Aswat al-Iraq: Iraqi Prime Minister Nouri al-Maliki on Sunday said that investigations have revealed that a man involved in the “slaughter” of several Iraqis was behind the shoe-throwing incident.

“We will not oppose the court’s decision if al-Zaydi is acquitted,” Maliki told reporters in Baghdad.

Al-Mashriq has more on the story.

Earlier today the family of shoe-chicker Muntadar al-Zaidi said the “AP completely lied” and that Muntadar is a supporter of the regime in Iran. It was previously reported that Muntader supported radical Shiite cleric Muqtada al-Sadr but this was mostly ignored by the mainstream media.

Later today, Iran called for the release of al-Zaidi.