Another day… Another “Jena 6” member is re-arrested. 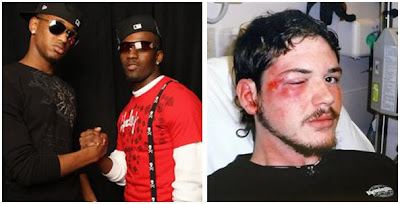 The photo above shows Bryant Purvis and Carwin Jones of The ‘Jena 6′ having a cool time at the 2007 BET Awards that aired on BET. They were invited to the show as guests of honor after nearly beating and innocent white classmate to death. This also shows the real victim Justin Barker in the hospital after he was beaten unconscious on Dec. 4, 2006 in Jena, LA by six black students. Barker, who was cold-cocked unconscious, was treated and later released from the hospital. The photo was released by the LaSalle Parish District Attorney’s Office. (Sweetness and Light and AP)

Gee, you couldn’t see this one coming, could you?
Mychal Bell shot himself in the chest after being re-arrested last week for shoplifting.
AP reported:

A teen convicted in the “Jena Six” beating case shot himself in the chest and was taken to the hospital Monday, days after his arrest on a shoplifting charge, police said.

Wooten believes Bell was upset over media coverage of the arrest last week.

“I think he was upset over the incident … and didn’t want to be in the news again,” she said.

Bell was one of a group of black teenagers who once faced attempted murder charges in the 2006 beating of a white classmate at Jena High School. The charges for all of the defendants were reduced.

Bell’s lawyer plans on playing the race card in his latest case, too.
The Shreveport Times reported:

Bell’s latest arrest comes less than a month after he completed an 18-month sentence for his role in the beating of fellow Jena High classmate Justin Barker in December 2006.

Security personnel at Dillard’s in Pecanland Mall in Monroe spotted Bell and an unidentified male Wednesday after placing $370 worth of merchandise in a Dillard’s shopping bag, police said. After the two separated, Bell left the store, was followed by a security officer and began running through the parking lot. He was found under a vehicle in the Sears parking lot, police said. Bell began “swinging his arms wildly” and delivered a glancing blow to the security officer with his elbow, police said.

“Dillard’s has a tradition of being overly suspicious of young black males,” Scott said, adding that he bases that on personal and court experiences. “He should at least have the presumption of innocence.”

More… Bell was cleaning his gun when it misfired and shot him in the shoulder. It was not look like it was a suicide attempt.
Steve Gilbert adds: As is so often the case, you have to bypass our mainstream media and go to the local sources to get any of the actual facts about such stories.