The IDF launched a massive military operation, striking Hamas installations throughout the Gaza Strip on Saturday.
Over 170 were killed in the bombings. 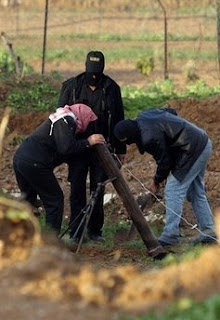 Palestinian militants prepare to launch a mortar round from Gaza City in February 2008. Israel has blitzed Hamas targets in Gaza with a wave of air strikes that killed at least 155 people in the besieged enclave in retaliation for ongoing rocket fire. (AFP/Mohammed Abed)

Hamas says at least 192 Gazans were killed in the first day of the offensive and 270 were wounded.

A 30 year-old Israeli was killed in Netivot after Hamas rockets hit his apartment building. At least Hamas 20 rockets have been fired toward Israel since Saturday morning.

The US called on Hamas to stop the rocket attacks. 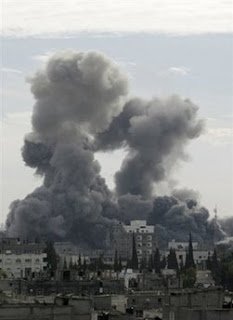 Smoke billows from the Gaza Strip following Israeli air strikes on the southern town of Rafah. Israel has blitzed Hamas targets in Gaza with a wave of air strikes that killed at least 155 people in the besieged enclave in retaliation for ongoing rocket fire. (AFP/Said Khatib)

Israel says it will expand the Gaza airstrikes as necessary.

UPDATE: The IAF succeeded in eliminating senior Hamas commanders during the offensive.

Israelly Cool is liveblogging the situation.