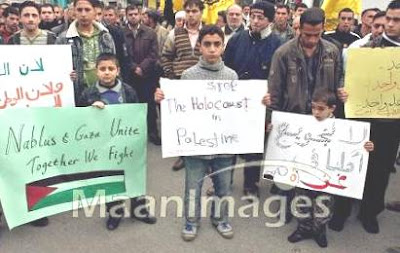 Protesters in the West Bank City of Nablus demonstrate against the Israeli attacks in Gaza. (Maan News) 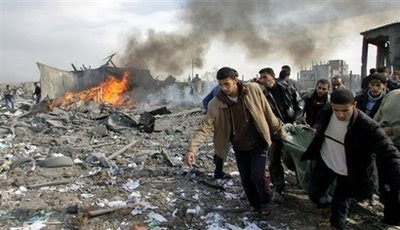 Palestinians carry a victim of an Israeli air strike that targeted the Buriej refugee camp in the Gaza Strip. Israel has vowed to keep up deadly air strikes on Hamas-run Gaza Strip for “as long as necessary,” saying it has “no other option” than a military operation on the Palestinian enclave to stop rocket fire. (AFP/Yasser Saymeh)

Here we go…
The Hamas spokesmen in Gaza called the Israeli bombing attacks on government regime facilities a “massacre” and a “Holocaust” today.
Ya Libnan reported:

A wave of Israeli air strikes on Hamas bases in Gaza that killed more than 195 people and wounded scores more reverberated across the Middle East on Saturday, as graphic images of the dead and wounded were beamed to millions watching Arab satellite channels.

The Israeli attacks, in response to stepped up rocket salvos by militants in Gaza, drew dire warnings of retaliation from Hamas and threatened to ignite outrage on the streets of Arab nations whose governments were accused by critics of doing little to help the Palestinians in Gaza.

Protests erupted in Ramallah, the seat of the Palestinian Authority in the West Bank, and in the Jordanian capital Amman, where demonstrators urged Hamas fighters to “destroy Tel Aviv.” Protests were also reported in Palestinian refugee camps in Lebanon.

The Israeli attacks were called a “massacre” and “Holocaust” by Hamas spokesmen in Gaza, their voices broadcast over images of piled bodies in a morgue and wounded youths being tended on the floors of Shifa Hospital, which was overwhelmed with casualties. In one lingering image, a man kissed the head of a dead child carried out of the hospital.

Palestinian legislator Hanan Ashrawi, speaking from Ramallah in the West Bank, accused Israel of ignoring the terms of the tenuous six-month cease-fire that expired December 19.

She clearly has contempt for people’s intelligence.

The mayor of Bethlehem turned out the Christmas lights in protest of the Gaza strikes.

You knew this was coming… Hamas said that Israel bombed a mosque.