Mahmoud is now a believer. 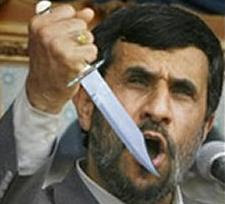 President Mahmoud Ahmadinejad in a message addressed to world nations on Tuesday condemned the atrocities of the Zionist regime and its supporters in Gaza Strip.

In the message, the Iranian president underlined that the real Holocaust is now taking place in Gaza Strip and Palestine, calling on world nations not to hesitate even for a moment to back the oppressed Palestinians in Gaza.

The president lauded the heroic resistance of the noble Palestinian people in Gaza who are being massacred by the savage Zionist occupiers.

Innocent women, children, youths and pious people in Gaza have fallen victims to the Zionist criminals just because of their attempts to vindicate their legitimate rights, he said.

Under such circumstances the global arrogance along with all bullying powers do not hesitate to confirm such inhuman atrocities through their silence, he said.