The anti-Christian banners were hung in the plaza in front of the Basilica of the Annunciation. 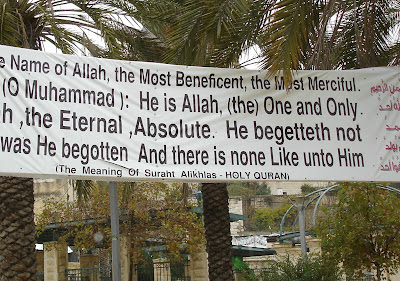 Italian churches may have included mosques in their Nativity scenes this year but that didn’t stop Muslims to hang an offensive anti-Christian banner in Nazareth.
CNSNews reported:

As Nazareth’s Christians prepare to celebrate Christmas, they are playing down the appearance of a confrontational Islamic banner that challenges an elemental Christian belief.

Journalists visiting the city saw two large banners–one in English, one in Arabic–hanging in the plaza in front of the Basilica of the Annunciation, with a verse from the Koran (112:1-4) contradicting the New Testament proclamation that Jesus is the “only begotten” of God.

“In the name of Allah, the most beneficent, the most merciful, Say (O Muhammad): He is Allah, (the) One and Only. Allah, the Eternal, the Absolute. He begetteth not, nor was begotten, and there is none like unto him,” the banner reads.